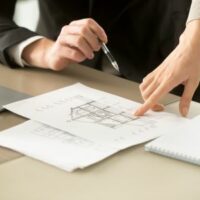 Much of the time, documents related to real property are required to be exact and specific, satisfying listed criteria in order to qualify as a deed, or a mortgage, or another type of document. However, the intention of the parties can sometimes make all the difference, particularly if a reasonable person could draw another inference. A recent opinion from the Maryland Court of Special Appeals called that issue into question.

In 2016, Damieon Reaves had lost title to a piece of property in Fort Washington, having fallen behind in payment of property taxes. In order to try and exercise his right of redemption on the property, he approached his sister, Lorita Tetteh, and the two created an agreement. Ms. Tetteh would pay the costs to redeem the property, and upon its redemption. Mr. Reaves would apply for a mortgage on it within 15 days so that he could reimburse Ms. Tetteh. The agreement held that if Mr. Reaves did not obtain a mortgage or repay Ms. Tetteh within 6 months, she would then become the sole owner of the property. This did happen, and in 2017 she obtained an order from the Circuit Court to transfer the property to her.

In mid-2018, Mr. Reaves filed a petition for a declaratory judgment on two fronts: that he was the owner of the Fort Washington property, and that the trustee’s deed was “in the nature of a mortgage.” Before that petition was ruled upon, Ms. Tetteh obtained a $195,000 mortgage on the property, ostensibly in order to renovate it. Mr. Reaves later amended his complaint to include a count of slander of title (an allegedly damaging statement about a person’s title to property), asserting that the mortgage was improperly obtained because Ms. Tetteh did not have a clear title to the property.

Essentially, Mr. Reaves’ main contention was that since the debt remained after the transfer of the property to Ms. Tetteh, the agreement and trustee deed “were in the nature of a mortgage” with a “continuing right of redemption.” He argued that the third-party mortgage for $195,000 “more than paid back” Ms. Tetteh, so the property should be deeded back to him free of all encumbrances. The Circuit Court found in favor of Ms. Tetteh on two grounds: the doctrine of res judicata – a legal doctrine which bars claims that are ‘identical’ to those previously adjudicated – and the fact that Mr. Reaves had not named all the necessary parties in his amended complaint.

The Court of Special Appeals reversed the judgment, however; while not necessarily reaching the merits of Mr. Reaves’ claim, they held that Mr. Reaves’ current claim was different enough than his previous petition so as not to be barred by res judicata. In addition, the court also held that the doctrine of lis pendens allowed Mr. Reaves to not name certain parties to his suit – namely the trustees involved – because the public notice of the suit is, statutorily, sufficient notice to all parties involved. The Court did not reach the issue of whether the siblings’ agreement was a trustee deed or a mortgage – but allowed the circuit court to reevaluate the question.

It remains to be seen as to how the Circuit Court rules on the merits of Mr. Reaves’ suit, but if you are in a similar situation where the title to your property is disputed, calling a Maryland real estate attorney from the firm of Henault & Sysko Chartered may start to help you understand your options. We are well versed in this area of law and are ready to try and assist you. Contact our offices today at (410) 768-9300 to speak to an attorney.