How an “Ambiguity” in a Commercial Lease Can Lead to Litigation 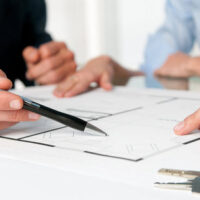 When negotiating any form of real estate lease, it is critical to be precise. Any ambiguity in the terms of a lease may lead to disagreements between the parties, which in turn can lead to litigation. And if a judge finds that the lease is indeed ambiguous, it may be necessary to look at certain outside or “extrinsic” evidence to resolve the dispute.

For example, a federal magistrate judge here in Maryland was recently called upon to determine the meaning of a disputed lease between the real estate arm of Walmart and a property owner in Anne Arundel County. The parties signed the initial lease in 2005 and made several amendments thereafter.

As relevant to the litigation, Walmart only had to pay a nominal amount of rent until “regular business is first conducted” from the leased premises. Once Walmart opened its store, it would start making regular rent payments to the property owner. Another part of the lease, known as Section 27, stated that at the end of the “tenth year of this Lease until the end of the eleventh year,” Walmart would have a 30-day option to purchase the property outright. The property owner was required to formally notify Walmart twice at the start of this option period, and if it failed to do so, then the notice period would not begin until Walmart received the second notice.

In May 2018–which was 10 years and 3 months after the Anne Arundel store actually opened–Walmart notified the property owner of its intention to purchase the property, notwithstanding the fact it never received either of the required notices. The property owner refused to sell. This prompted Walmart to file a federal lawsuit, alleging breach of contract and demanding specific performance (i.e., a judicial order to sell the property to Walmart.)

The key issue before the magistrate judge was the proper interpretation of Section 27. More precisely, the question was when did the option period actually begin? As noted above, Section 27 pointed to the “end of the tenth year of the Lease” as the key date. But was this 10 years after Walmart started paying its actual rent, as Walmart argued, or 10 years after the effective date of the lease, as the property owner maintained. Additionally, the property owner insisted the language of the contract gave it “sole discretion” to decide whether to commence the option period at all by deciding whether to give notice.

The magistrate ultimately sided with Walmart’s interpretation of the lease. First, the lease clearly granted Walmart the option to purchase. The owner had no discretion to refuse. Second, the property owner breached the lease by failing to give the required notices when the option period began. Finally, while the language regarding when the option period began was ambiguous, there was “ample extrinsic evidence” that both sides intended for it to start 10 years after Walmart started paying full rent. And since Walmart exercised its option within the proper time period, it was entitled to purchase the property.

Commercial leases and sales agreements are often complex documents that require careful drafting and review. An experienced Maryland real estate attorney can help you identify and avoid potential misunderstandings so that they do not lead to a courtroom fight down the road. If you need advice or representation in connection with any real estate matter, contact Henault & Sysko, Chartered, today at 410-768-9300 to schedule a consultation.